Just down the street, middle school youth who were participating in the YES Program asked to make signs calling for peace.  The YES group, led by 12 year old Briana Sandoval, organized a small rally in front of the Recreation Center, holding signs that asked passing cars to “Honk for Peace.” 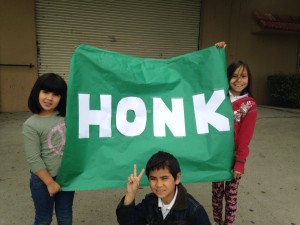 That night the violence escalated. The protests several blocks away turned violent and one man watching the protests was shot and killed. When a police officer at the scene tried to give the injured man CPR, he was hit in the head with an object thrown by someone in the crowd.

The next day, the YES group began their protest for peace again, but this time they were joined by nearly 200 residents and other community organizers. 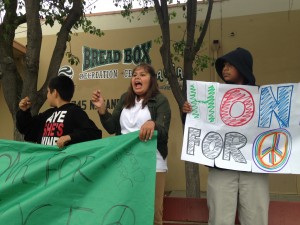 The YES group’s leader  discussed the students’ actions at the next session, relating their experience to what they had learned in the program. The participants said that they felt more confident working with adults to bring their ideas into action.  Briana said that “the YES program has motivated (her) to do these type of events”.